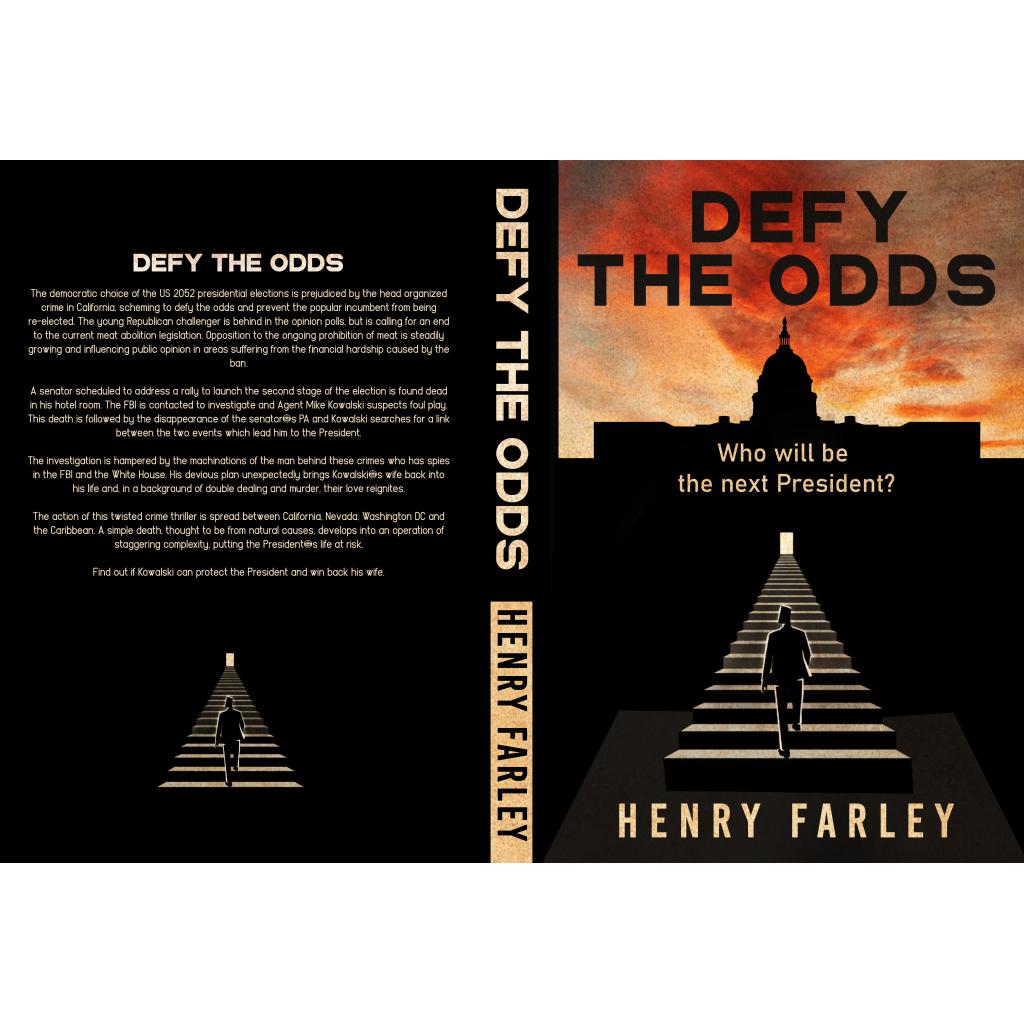 Reviews of Defy the Odds

In the development of Defy the Odds I had several friends read it to give me their verdict. Once I had incorporated their comments, I went to Readers' Favorite to get 3 editorial reviews. Their reviews are listed below:

Defy the Odds by Henry Farley is a political thriller/crime novel that has you sitting on the edge of your seat waiting and wishing for more. Set in 2052, the 65th President of the United States, President Tom Mallory, has a good chance of re-election. His main opponent is Mason Lewis, a younger Republican who has foreign support ready to give him funding and make him dependent on them. However, the election campaign takes a terrifying turn when Democratic Senator Ron Quinn turns up dead, and the FBI is involved. Agents Miles Kowalski and James Shaw investigate the death and find a conspiracy that can end the life of Tom Mallory. It is now a race against time as agents Kowalski and Shaw try to figure out who is behind the chaos, what they want, and how they can protect the President from imminent death.

Usually, political thrillers bore me. However, Defy the Odds had me hooked from the very beginning. I have to thank author Henry Farley for this. The prologue offered a summary of the story without giving away the plot. Instead of playing a guessing game with readers, he lays down the facts for them so that they are fully involved from the outset. I love how Kowalski took control of the situation, leading from the front, and was fully immersed in the case. While the author talks about many issues that will become more pressing in the future, he never once loses focus on the plot. The impact of the meat industry, global warming, and carbon footprints are being studied and evaluated, but this novel gives us a good look at what could happen in the future if we are not careful. The pace of the story is fast, but not overwhelmingly so. The readers get plenty of time to adapt to the story, pick a side, and enjoy the ride.

Reviewed By Jamie Michele for Readers’Favorite

The President of the United States is ripe for assassination, and all FBI Agent Mike Kowalski has to do is prove it, and prevent it, in Henry Farley's novel Defy the Odds. The events that hurl themselves at Mike from every direction are top-down. Prong one is POTUS Tom Malley and his near-political suicide with a blanket meat ban. Prong two is the backroom machinations of a well-oiled plot to replace Malley with a puppet Republican as leader of the free world. Prong three is the infiltration of operatives strategically placed by a crime boss—including in Mike's own trusted circle—in high-stakes espionage and murder plot. A novel with a rising body count, bombs, spycraft, a nod to the small California city of Walnut Creek that I personally lived in, and... a porn-stache. Defy the Odds is basically my Christmas list in a tidy novel by Henry Farley. I had doubts in the first few chapters when Farley was quick to point out that FBI Agent Mike Kowalski's sidekick James is an FBI mole and saboteur, but as the book progresses it becomes clear this direction is relevant to the plot trajectory and not the spoiler it seems. Surprises are everywhere and there continue to be shockers throughout, namely murders that are real and even one that only pretends to be [enter, the porn-stache]. The prose is tidy when all is accounted for and those pages turn fast. I finished in two days and loved every minute of it. Very highly recommended.

Defy the Odds by Henry Farley is a political thriller set thirty years in the future, where Democrat Tom Malley is President of the United States, and an election cycle is making its way around again to determine if the people want Malley for a second term. That is if he survives his first. A beef ban has been levied to slow down environmental damage with mixed popularity and massive economic impact. Meanwhile, a senator and his personal assistant are dead and FBI Agent Mike Kowalski is doggedly pursuing the case. His partner James Shaw, however, is not the true blue blood Mike thinks he is. As the pieces start to click together and hazy backgrounds become clearer, Kowalski begins to unravel a tightly woven conspiracy and Shaw is faced with uncomfortable truths about who he really is.

Henry Farley writes a savvy thriller with a cast of diverse characters in Defy the Odds. Honestly, it's the beef ban that got me to pick up the book as it is a fantastic fresh angle to launch a story from. The ban and demonstrations are certainly strong subplots but it is more a catalyst for a perfect storm and, within the framework of the larger plot, it is probably one of the most creative smokescreens I've come across in the political suspense genre. Kowalski is as likable as one would expect from a straight arrow, fallible in his own way but fundamentally above-board. Shaw's conflict is the most riveting and in a testament to Farley's skill as an author, he is also very likable. Like everything in politics, there are pawns, such as the unsuspecting and lamb-like Elle, and there are also those who are set up for collateral damage, whether intended or not. Overall, this is an intelligent, solid body of fiction and I'm pretty sure those smart enough to give it a shot will agree.

I'm most pleased that the 3 reviewers clearly enjoyed the book. The book will be published shortley but I hope this gives you an idea of its content and quality.